A sewage pump or sump pump can be complicated and easily ignored. During a home inspection walk through, I am often asked what the ‘circular cover with pipes and wires’ coming out of the basement floor is for (usually located in a closet or mechanical room). The simple answer is that it is either a sump pump or a sewage pump. The complicated part can be identifying the difference between the two. It is very important that a home owner be able to identify every component in their home and more importantly how to maintain and monitor it.

Sump and sewage pumps are both located in the basements of  homes and buildings. Their primary function is to act as an indoor septic system. Both contain a holding tank canister that is around five feet below the floor (sump) and a pump. Their main function is to bridge the drainage through force (a pump) when the basement is below both the city sewage line and storm drain; and cannot be drained via gravity. Both pumps are usually powered by plugging them into an electrical socket that is nearby and in some cases there may even be a battery back up if the electricity should ever go out. 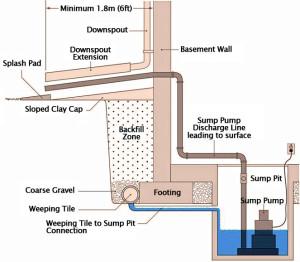 Sump pumps are machines designed to pump out naturally occurring water (not sewage) that may otherwise flood or damage a basement or foundation. They are not always necessary in basements or crawlspaces but usually installed when there is a high water table, poor drainage, no city storm drain or gravity cannot drain water away from the home. If this water is not pumped away major damage can occur to structure and finishes of a home, costing the home owner greatly.

The most common sump pumps are either classified as pedestal or submersiblehow-sump-pump-works-diagram. Pedestal types are mounted above the sump pit (see figure) and easily identifiable as a sump pump. The submersible pump is a sealed waterproof pump that is let down into the sump pit, the hole that is used to collect the water. Both of these pumps are powered by cords leading to electrical outlets. It is a good practise to have both battery back ups and sump pit alarm to alert you if the pump is not working or the water level is too high, and a battery backup to operate the pump in the event of a power outage, especially if there is a rain storm.

Sump pumps need routine maintenance and testing. I often see them abandoned with makeshift covers over the sump hole. It is necessary to test them several times a year to verify they are working and that the battery back up is charged. It may be necessary to add water to the sump pit and activate the pump.

Sewage pumps are similar to the sump pump except their primary function is to remove sewage and sewage-ejector-pumpmall particles from a sump pit in the basement to a septic tank or the city sewage system. The ejector pump that processes waste water will have a sealed lid on its basin and a vent pipe to handle sewer gases. They can also be referred to as grinder pumps or sewer ejector pumps because they grind up the solids so they can fit through a smaller pipe.  The city sewage pipe system is usually around five feet under the road. Conversely, if there is a bathroom in a basement and the road appears to be 5 or more feet above the basement there is a good chance there is a sewage pit and pump in the basement. The sewage pump is needed to pump the refuse from the toilet out to the city or septic system.

Unlike sump pumps that need routine checking and maintenance, sewage pumps can usually have the sump pit lid sealed shut and therefore no routine maintenance is required. However, one needs to be mindful that flushing large objects down the toilet or using a garburator can potentially clog the pump or pipes causing backups and flooding. It is always good practise to have an alarm installed (usually standard on sewage and sump pumps) on a float in the pit. In the event of a clogged pump or back up –  the homeowner will be alerted so you can call an emergency plumber or shut off the water.

One of the best ways to test and determine if you have either a sump pump or sewage pump is to flush the basement toilet several times and listen for the sewage ejector pump to turn on. A sewage pump will also have a sealed lid to prevent sewer gasses from entering the home as well as  2 pipes coming out of the lid; one for venting sewage gases and one to pump out the waste (grey water). It is also important for your home inspector to test any overflow alarms and check the charge on any battery backups that may be present.